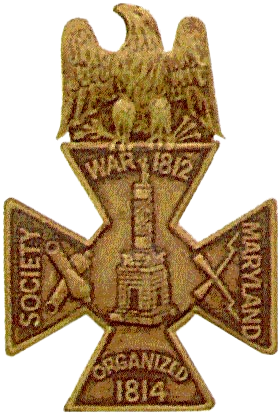 The Society of the War of 1812 in Maryland can trace its roots back to May of 1814 in Baltimore when civic leaders brought Baltimore Militia together in solidarity under imminent British attack. The Brits arrived in September and for three days the endless bombardment and infantry advances did not unseat the courageous stand of Baltimore. The City was left in awe and in gratitude as the invader finally headed down the bay. Francis Scott Key was inspired to compose his immortal lyrics which would be named "The Star-Spangled Banner".

That group of leaders which rallied the men of Baltimore together in May of 1814 once again rose, this time to form the Association of the Defenders of Baltimore in 1814, chartered May 16, 1842, the exact date decided upon by a committee. The Association of the Defenders of Baltimore in 1814 was needed to perpetuate the Star-Spangled legacy through the 19th century in the face of opposing obstacles which were threats to the existence of an annual remembrance of September 12th 1814 that had occurred since 1815. With new life, the September 12th annual celebration returned as part of the heart and soul of Baltimore--and even grew.

The long dreaded and inevitable passing of the Old Defenders Association members had been planned for. The descendants of the Old Defenders were to continue the leadership mission of their fathers, and are now known as The Society of the War of 1812 in Maryland. It has been the descendants of the defenders who have lead the initiative to make the Star-Spangled Banner our national anthem. Keys lyrics brilliantly captured the spirit of the "heaven rescued land". Leadership of the Society of the War of 1812 and its predecessor leadership have for over two centuries been faithful to the call of remembrance of the sacrifice and patriotism of our nation.